The convoluted user interfaces of most desktop GIS software is something I revisit from time to time. James’ most recent issue of his SpatialTau newsletter got me thinking about it again. A while back, I got caught up in a Twitter discussion about it. Tools like geojson.io and TileMill have fantastic interfaces, but they also perform narrow functions (data editing and map composition, respectively). 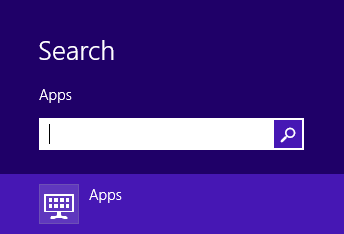 For a while, I’ve been thinking that this might be an approach worth investigating: rather than one piece of software with everything in it, a suite of tools dedicated to different aspects of the typical GIS workflow. This would not be a panacea as some tasks are just more complex than others. (Think of all of the editing options available in any piece of CAD software, and this is devoid of any analytical tools.) As attractive as this approach seems to me in concept, I suspect it would break down in execution. I think it could end up multiplying the problem with many overly-complex applications instead of just one.

Over the last year or so, I’ve become somewhat enamored of another approach: the search tool. This requires a little back story.

Sometime in early 2013, it became necessary to repave my wife’s old desktop PC. We had purchased it in the waning days of Windows XP and had never upgraded it to Vista or Windows 7. Due to years of installing and uninstalling various forms of games, educational software, and the like, it was clogged up and needed to be rebuilt.

Given the time frame, I decided to install Windows 8. I immediately hated it. The UI was clearly meant for tablets and phones and was just cumbersome for a standard desktop PC. Or so I thought. The upgrade to Windows 8.1 didn’t do much to lessen my hatred.

I was talking about this with our company’s IT support contractor and he said to me “You’re kidding, right? Windows 8 is the easiest operating system Microsoft has ever released.” I was incredulous. He said “Just slide your mouse over to the right and type whatever you want to do into the search tool.” I started doing that and I became hooked. User management? Type “users” and it will most likely be in the top of the results. The same for any applications I installed, or printer management, or whatever. I have long since stopped caring about where these things reside in the live tiles. I use the desktop and the search bar. The desktop has icons of my most commonly used applications only.

This approach bled over into my use of Ubuntu. I used to hate the Unity desktop and would always put Cinnamon or some version of Gnome on my machine. Now I live in the Ubuntu search interface and no longer care about Unity. So, yes, Windows 8 made me more productive on Linux. Go figure.

So, back to GIS. As James pointed out, desktop GIS typically has user interfaces that only a mother could love. Perhaps it’s time to hide all of that complexity behind a search tool that surfaces the tools you need when you need them. After all, no software can or should obviate the user’s understanding of workflow, so it is reasonable to expect users to be able to search for the tools they need for a given task. Perhaps each tool could have pointers to “related tools” that are commonly grouped together, or even suggestions for tools that a particular user has commonly used together. The software could even allow users to build their own task-specific toolbars to be save in a project.

I’m thinking it can’t be worse than this: