It’s hard to believe, but I last touched upon this topic over two years ago, when my family and I were living in our between-houses rental. One of the goals I had when building our current house was to create a space where I could more effectively work from home. To that end, I have a dedicated office that I’ve been working toward optimizing for my technical work.

One advantage of a dedicated space, which I did not anticipate ate the time, is compartmentalization. One of the dangers with working at home is the blurring of the boundary between work time and personal/family time. In our old house, I definitely felt that as I was working from the dining room table. Now, I can more effectively shut the door and step away. I’m not perfect at doing that, yet, but I am getting better. 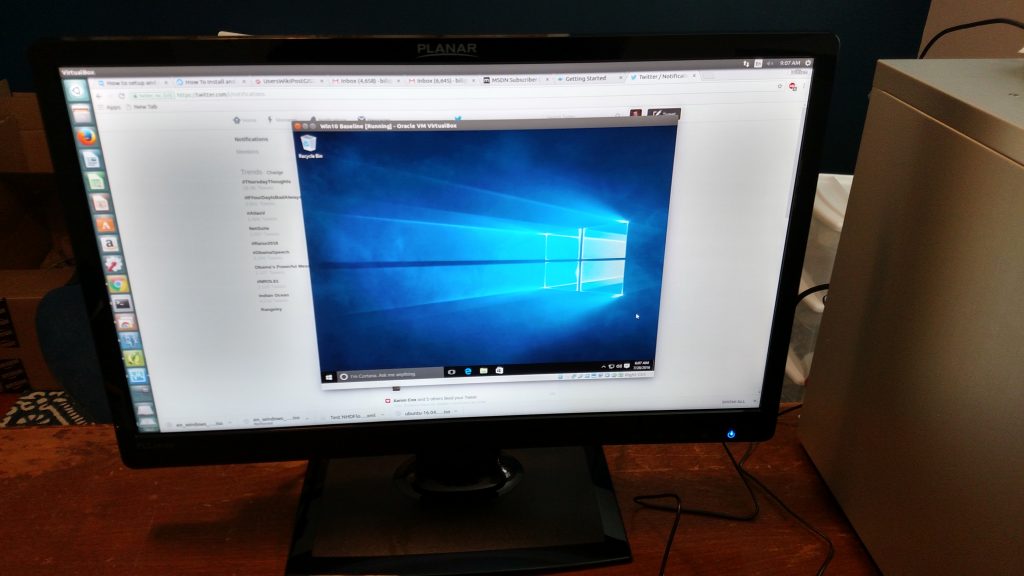 As a consultant doing federal work, I don’t get to work off-site all the time. I’ve been fortunate, however, to have worked a few projects over the past couple of years that have allowed it, so I’ve taken advantage of it as much as possible.

In the past two years, the nature of my work has shifted dramatically. I am still doing my core federal work but I have diversified the smaller projects that I work on an independent basis. This has been primarily to keep my technical skills as diverse as possible. I still do a lot of .Net work for federal customers but, on the other hand, I am also doing a fair amount of geospatial web development these days, centered around a core stack of PostGIS, Node, and Leaflet. Other tools get tossed in based on requirements, but those core technologies are common.

As a result, I found myself doing development in a number of different environments with a variety of tools. (Due to customer preferences, for example, I have projects that use Visual Studio 2010, 2012, and 2015.) While PostgreSQL is my mainstay, I also work in SQL Server (differing versions there, too).

I had two machines, one company-provided and one personal, to attack these various configurations. Both were severely under-powered for what I was doing, so I recently purchased a new system to unite all of my project work in one place, and allow myself to make use of virtualization in order to segment off the various development and deployment configurations I support.

I knew I wanted an Ubuntu Linux host machine, primarily because it’s what I prefer on a daily basis. I opted to buy a pre-built system from System76 versus building one myself. I’ve done that a few times, but simply don’t have the time for it anymore and was attracted to the convenience of having someone else do it for me.

I customized the System76 Wild Dog Pro system, expanding the RAM to 64GB, the system drive to a 250GB M.2 SSD, and adding a 4TB hard drive for additional storage. This configuration, especially the RAM, allows me a lot of flexibility for configuring and running project VMs in VirtualBox, while not taxing the performance of the host machine.

My plan is to keep the host system relatively clean. I have installed the following directly to the host:

I use PostGIS so commonly that I decided to install it directly onto the host and allow project VMs to access it over the network. This setup actually emulates a typical deployment pattern pretty well, in addition to giving me just one installation to manage. I have set up a tablespace to direct the data storage to the 4TB hard drive.

That’s it. Everything else will live in a VM. As a result, I’m storing a lot of ISO images of operating systems and application installers, but they live on a USB 3 external drive. I’m currently in the process of creating my baseline VMs, including the one that will be my primary ArcGIS machine. (The image above shows that I’ve already build a Windows 10 baseline.)  I have also imaged my current development laptop to a VM using the VMWare Infrastucture Client. That will help with the transition of my development environment into this new setup.

You probably noticed that I purchased a desktop workstation, but that I am currently using a laptop. I have always been a laptop guy because I liked the mobility and was willing to sacrifice some power for it. Two big changes for me are that I don’t move around as much and that I have had a need for more power. I had been thinking of making the switch for a couple of years and finally decided to make the jump.

What about the mobility? I still need it occasionally, which is why Chrome Remote Desktop is in the mix. I’ve tried it a few times and it seems to work well. In my opinion, it works much better than VNC, giving me a Windows RDP type of experience. I’ll be putting it to the test very soon as I attempt to work remotely from 1,100 miles away. I don’t have the world’s greatest ISP, and I don’t have a UPS yet, so this could fail spectacularly, but I’ll give it a go.

I expect it to take a couple of weeks to get my feet back under me after this transition, but I’ll post an update soon.