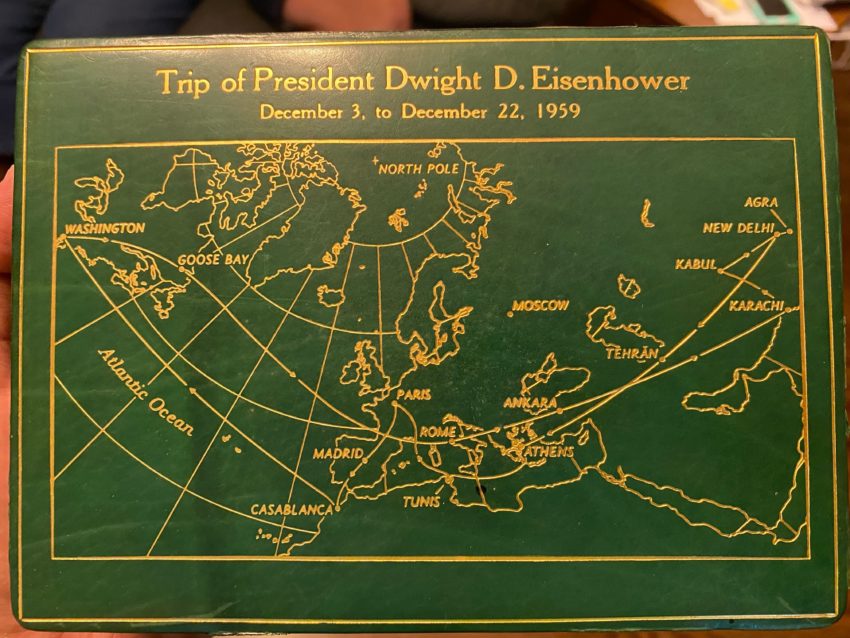 When he was in the Air Force, my father served on Air Force One under four presidents – Eisenhower, Kennedy, Johnson, and Nixon. He was on the engine crew and got to see a lot of the world over the course of those administrations. I grew up with Presidential memorabilia all through our home: signed photos of the presidential plane, commemorative holiday pictures from the White House, and Christmas ornaments, for example. Occasionally, I’d run across fun things like his old passport with stamps from countries who have not been friendly with the US in decades – hints of a bygone geopolitical era. One time, I found four sets of gold-rimmed Ray-Ban aviator glasses that had been standard issue for a few years – especially for those who spent long days on tarmacs.

Recently, he pulled out a memento I had never seen, pictured at the top of this post. It was box that was given to personnel who accompanied Eisenhower on a trip through Europe, Asia, and Africa in 1959. The box was full of other mementos, including a deck of cards from the Columbine, the propellor-driven predecessor to the Boeing jets that have been flown for several decades now. Also a Zippo lighter still polished to a high sheen. But what fascinated me was the map on the cover. I took a picture of it and came home intent on recreating it with GIS.

The styling is vintage 1950s, which is one thing I loved about it. But what really caught my eye was that it was a real map. The graticule was obviously correct and the landmasses appeared to be to scale. The cartography is brilliantly understated. This map commemorates a trip. It leaves the beholder to interpret the land masses for what they are. It has elegant points and labels for the stops, with a minimal set of other reference points. I love how it calls out Moscow, as if to highlight how the President was unconcerned about skirting around the Soviet Union during the height of the Cold War. The lines showing the legs of the trip are elegantly curved. The map is a study of simplistic beauty. Oh, and that polar projection!

I couldn’t get it out of my head, so I got to work. First, the data. The medium-scale (1:50m) landmass data set from Natural Earth seemed to match the level of detail quite well. Since it is just landmasses, I didn’t have to deal with dissolving country polygons to mimic the original. Next was to get the points representing the stops. There weren’t a lot, so I hand-jammed them into a CSV, using latitude.to to get the coordinates of each city. I added those to QGIS as a delimited text layer. I next generated a 10-degree by 10-degree graticule using the MMQGIS extension. (Luckily, I seem to have eyeballed the grid size correctly.) Finally, I needed the lines between the stops, so I tweaked the CSV a bit more and used the “Points to Paths” tool in the QGIS processing toolbox to generate the lines.

Once I added all the data, I immediately saw a problem: straight lines in the graticule and in the flight path – not the smooth curves of that original map. To fix that, I densified the line layers using a 0.001 degree density. I had my circles and curves now.

Next, it was time to style this thing. I am not a cartographer, but I am an excellent plagiarist. I eyeballed the green and gold used on the original. The green is actually lighter than it looks in the photo above. It was impossible to know what fonts were used, so I again used the hunt-and-peck method until I found a suitable sans serif font for the point labels. Then I played with a mask around the labels to get them to stand out like the original. I was pretty happy so far. Last was creating the arrows for the flight path.

To finish it, I went to the QGIS layout manager. There, I added a neatline/border around the map and another around the whole layout canvas. The then had to eyeball a suitable serif font for the title. (Garamond worked well.)

The end result, pictured here, isn’t an exact replica. I let the projection handle the line curvature, so it lacks the flourish of those lines that had been carefully hand-drawn. I also don’t have spacing between the flight path segments. So this map is more of a tribute than an exact quote.

As I mentioned a few posts back, I’ve been looking for ways to flex my GIS muscles again. This project allowed me to touch a few areas of QGIS that I haven’t in a while. The fact that it had a personal connection to my family made it all the more enjoyable. Maps always tell a story and this one has a lot to say about the geopolitical climate of the past as well as the talent and style of mid-century cartographers. This was a lot of fun.