Yesterday, I attended TUGIS 2017, which was the 30th installment of Maryland’s annual statewide GIS conference. It was a great experience as there is a lot of innovative work going on in Maryland. The one-day format is specifically designed to be a high-value experience. Attendees trade the minimal impact on schedule for the fact that they will certainly miss some content they want to see. I think it’s a fair trade-off. 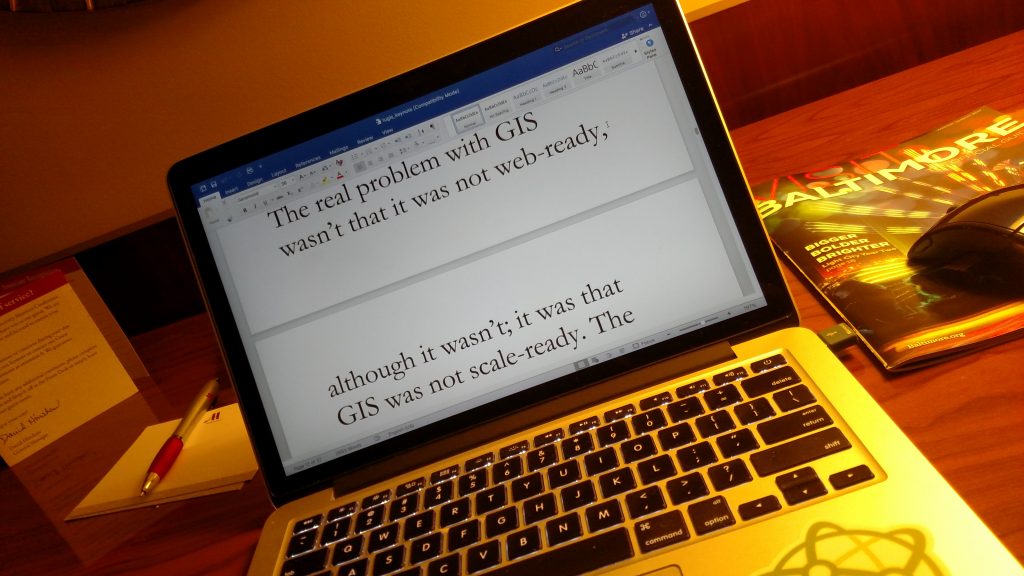 I also happened to give the keynote address at the conference. It was quite an honor to be asked to address so many geospatial practitioners who are working to tackle pressing issues in Maryland. Thanks to Ardys Russakis and the conference organizing committee for inviting me.

A few have asked me if it was recorded. To my knowledge, I don’t think so. Some have asked me to post slides. While I did have a slide deck, it was designed to run in a loop and thematically support my talk, but I did not ever speak directly to any slides. As a result, the slides would be useless on their own. (Thanks to Howard Butler and James Fee for lending images to the slide loop.) I am becoming increasingly disenchanted with the slide deck model and probably won’t ever do another talk in which I speak directly to a deck, even in “zen” mode.

I suppose I could post the full text of my talk, but I think I’ll mine it for concepts to support future posts.

In a nutshell, I spoke about some themes that I come back to often of GIS as is has been being less useful, relevant, or desirable to verticals outside its traditional markets, in spite of the fact that those verticals see value in spatial analtyics. I also talked about how the changing data environment is causing GIS to become less distinct as a technological entity. I have addressed those ideas more thoroughly here in the past, so I won’t cover that ground again.

I did, however, also address the role of geospatial practitioners in the evolving state of GIS, as I see it. I’ll leave off with these snippets, lifted from my talk.