Among the many things I did at the Esri Federal GIS Conference was that I attended the Homeland Infrastructure Foundation-Level Data (HIFLD) community meeting. HIFLD is now an FGDC Subcommittee, being led my Mr. David Alexander, head of the Department of Homeland Security (DHS) Geospatial Management Office (GMO). Now that the alphabet soup is out of the way (though there will be more), I’ll get to the significant news of the meeting: the announcement of the availability of the HIFLD Open infrastructure data sets for general access and download. Feel free to browse and get the data here: https://hifld-dhs-gii.opendata.arcgis.com/ 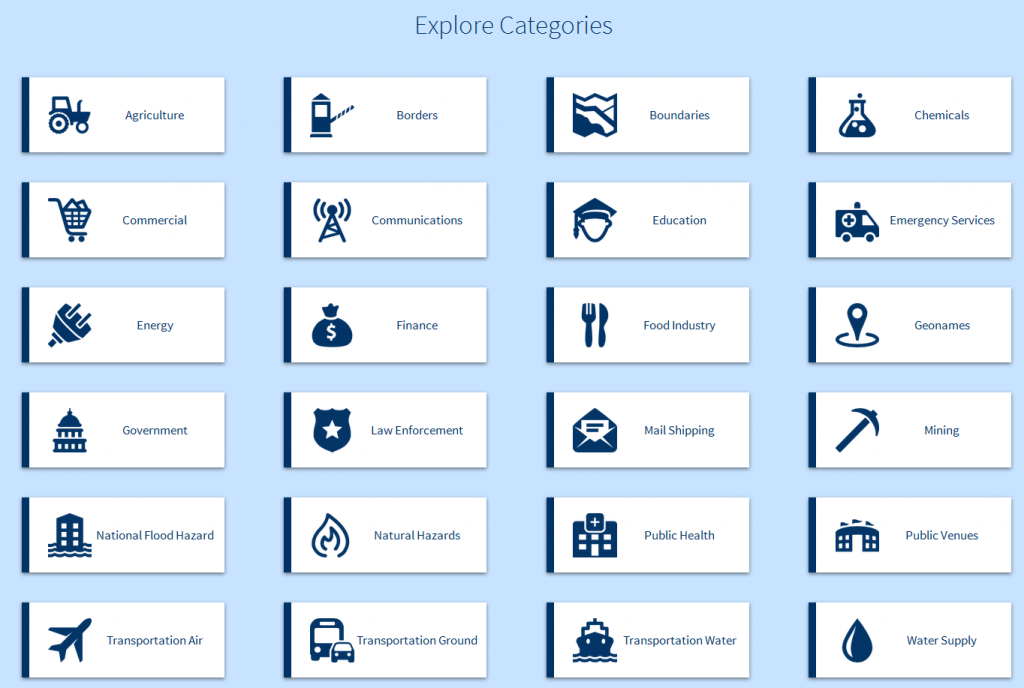 HIFLD Open uses the Esri Open Data platform to make the data sets available. In yesterday’s meeting. Andrew Turner of Esri stated that it took just a month to implement the site and put the data online. As my friend Archie Belaney points out, this is an illustration of the fact that the impediments to getting this done before now have had more to do with anthropology than technology. The HIFLD data started out as HSIP Gold, which included a mixture of government and commercial data sets. The commercial data was distributed under a wide federal-only license. Because all of the data was only distributed via snail-mail DVDs, it meant that the license restrictions of the commercial data sets hindered the distribution of the government data as well. Physical media trumps all. HSIP Freedom was an attempt to make it easier to get some of the HSIP data to state and local users, but byzantine workflows again meant to protect access to commercial data sets proved unworkable. HSIP was always hindered by the ever-present cadre of single-issue voters who fretted about the potential vulnerabilities presented by the aggregation of such data.

Luckily, the culture (anthropology) of open data has rendered those dissenters mute. States and localities have been publishing much more detailed data sets for some time now. Thankfully, the new stewards of HIFLD and the data formerly known as HSIP have understood this, reorganized the data into segments that can be freely distributed (Open) and that which requires access control for any number of reasons. As a result, data that should have always been freely available is no longer bound up by restrictions on other data that happen to reside on the same physical media. The government leadership deserves credit for recognizing and solving this cultural issue and the technical leadership and contract support (Ardent Management Consulting) deserve credit for making it happen so quickly.

As my career has progressed, I have become much more removed from HIFLD than I was at the outset. It’s now something I watch from afar, mainly for nostalgia. As a technologist, my experience with HIFLD and HSIP was a lesson in the primacy of anthropology over technology. Numerous times, technical solutions were presented and subsequently discarded as proponents could not overcome the concerns of those single-issue voters. As a result, I was very happy to see this significant step represented by HIFLD Open toward the fulfillment of the vision that was articulated for HIFLD years ago.