I didn’t go to the FedUC today. I haven’t been staying in the city but have rather been commuting in each day. The weather is rather nasty so I decided to forego the rousing sendoff. I can handle snow and I can handle rain but I want nothing to do with ice. 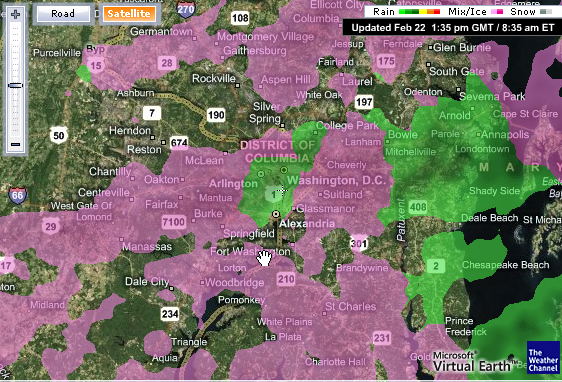 So I thought I’d do a little summation of yesterday. I did a brief mention of the exhibit hall yesterday and I don’t have much to add to that other than the fact that it was interesting to see both Google and Microsoft with booths for GE and VE respectively. That definitely reinforced the direction outlined in Jack’s talk on Wendesday. I spent most of the day in either paper sessions or meetings. From a business standpoint, it was very fast-paced and was a valuable day. I didn’t get to any technical workshops (sorry, Kurt, I dropped the ball on your IEditor question) but Dave did so maybe he’ll delve into that more.

The FedUC is much more compact that the UC and differently focused than the dev summit so the technical workshop offerings were not as deep as they are at those venues. Also, the actual development teams were not really present in the way that they are at those other events. The FedUC is much more focused on solutions and applications of ESRI software to government so it was great from that standpoint but hardcore nuts and bolts issues are probably better addressed at the dev summit.

One of the more unsettling aspects of the FedUC was seeing all the ESRI staff in suits. It was the first ESRI event I’ve ever been to where I felt underdressed on the first day. But it was DC, not Southern California.

The general approach to the paper sessions was solutions-based. It was usually either a government user or business partner or both describing solutions implemented with ESRI software. One thing that was nice is that everyone seemed pretty comfortable sharing the “warts” so there were a lot of good lessons learned in each paper session. It was a good way to get some real-world data. For me, it was also valuable to implementations that solved different problems. I know I can get pretty focused on what I’m doing so it’s nice to come up for air.

According one ESRI staffer I was talking to, they had about 2600 attendees registered and maybe as many 400 walk-ins. That’s significantly larger than previous FedUC’s. Most of the paper sessions I was in were well-attended. This year may have been the tipping point for the FedUC. ESRI may have finally found the right tone for the event.

The social at the National Geographic building was nice. The open bar was nice touch, too. 😉 I saw lots of people I haven’t seen in a long time and got you meet a quite a few that I have been wanting to meet. By then, the ESRI staff were letting their hair down so the atmosphere was more relaxed. Thursday was a very intense day for most everyone I talked to, with a lot being crammed into the day. That may have been exacerbated by the fact that the Friday weather was supposed to be bad and a lot of people were planning on not going on Friday. Either way, the social was very relaxed and was a good time.

I said at the outset that I wear a few hats at work. If I had to leave one at home for the FedUC, it would be my developer hat but I found the conference to be very valuable from a business standpoint. I was planning on going to the dev summit but it looks like that may be falling through so next up (in the ESRI world, anyway) will be San Diego for me.